Community bankers are widely divided over their prospects for profit improvement during 2015.  The uncertainty of movements in interest rates, rising overhead and continued regulatory pressure have not abated; compared with 2014, 2015 appears to be more of the same.

Annually during the fourth quarter, the asset/liability management consultants at Austin Associates assist clients with the preparation of their annual profit plans. This provides us with insights into prospective strategies community bankers are considering to address these and other challenges they see on the horizon.

Following is a summary analysis of profit planning strategies many of our clients are considering for 2015.  Our sample group represents community banks ranging in asset size from less than $100 M to more than $1 B (Bank Size & ROA – Figure 1). 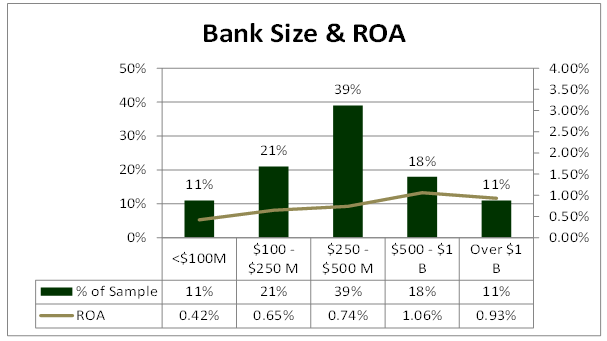 Our study found that projections of profitability within the sample varied by asset size.  Larger banks tended to have higher levels of profitability projected for 2015.  Banks with $500 M to $1 B in assets had the highest projected ROA at 1.06 percent.  Banks greater than $1 B fell back toward the group wide average of 0.90 percent with an ROA of 0.93 percent.  The average size of all the banks in the sample group was approximately $450 M.  The smallest banks remain severely challenged, with those under $100 M in assets projecting a much lower 0.42 percent ROA.

GROWTH IN LOANS AND DEPOSITS

None of the banks included in our assessment forecast a decline in deposits or loans compared with year-end 2014 totals.

The existing mix of loan products (Figure 2- Existing Loan Mix), and the anticipated level of growth during 2015 in Figure 3(2015 Growth), indicate that commercial loan types will be a major driver of bank profitability. 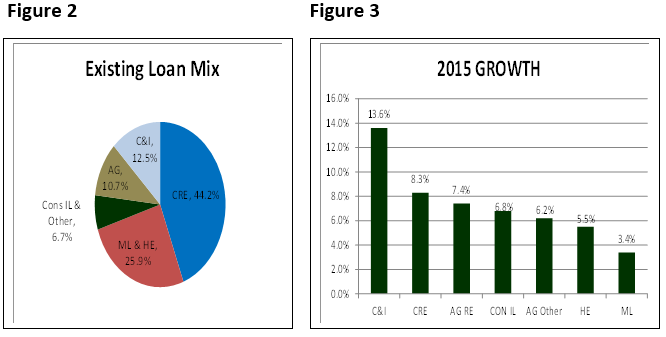 Each bank in the sample group has its own growth expectations.  Overall, commercial loan products are the most likely to grow during 2015.  C&I loans lead with a projected growth rate of 13.6 percent.  Commercial real estate loans followed with a projected growth rate of 8.3 percent.  Agricultural real estate loans are next with a 7.4 percent growth rate.  All other loan types, including portfolio mortgage loans, home equity loans, and consumer installment loans, are forecasted to grow at lesser rates than the overall loan portfolio average.  Not a single loan category is expected to decline from 2014 levels.

The Expected Change in Yield chart (Figure 4) illustrates the disparity in community bankers’ expectations pertaining to yields on each of the loan portfolio types.  Overall average loan yields are expected to remain constant between 2014 and 2015; both periods are estimated to have average yields of 4.72 percent. However, there is a substantial variance indicated across product types and across individual banks within the sample.

There is a significant variance among banks, for example, with some expecting their consumer installment loan yields to decline by 46 basis points.  Other banks are anticipating as much as an 86 basis point increase in yields, with the overall average rate dropping by five basis points.

Bankers’ expectations appear to be even more divergent with respect to home equity loan yields.  As Figure 4 indicates, yields could rise as much as 1.25 percent (124 basis points), or fall by more than a quarter of a percent (29 basis points).  There is greater consensus on the movement of rates for other loan types (C&I loans, portfolio mortgage loans) where expectations for rate movements are confined to a 45 basis point increase and a 38 basis point decline.

Among larger, more profitable banks, 10 percent of loan growth is funded through existing liquidity. This is an important distinction since funding new loan growth from existing liquidity creates a favorable mix variance – an effective strategy for banks to improve their profitability in the current rate environment.

Comparatively, funding loans with additional deposits will not improve the loan-to-asset ratio, a key to improving profitability.  Within the entire study sample, deposits are expected to increase by 5.6 percent, nearly matching the growth in loans, and investment balances are expected to decline by 2.6 percent.

Another variance in our sample relates to expectations regarding the direction of funding costs.  As noted, not a single bank in the sample group projects 2015 deposit balances to decline from 2014 totals.   However, 53 percent of bankers expect their average cost of funding to rise in 2015, while 43 percent project that those costs will decline, continuing the trends of recent years.  Only four percent project deposit costs to remain unchanged.

Net incomes are projected to increase 4.81 percent over 2014 levels.  Earnings growth is expected to be fueled in large part by a 4.95 percent growth in assets, comprised of an 8.2 percent increase in loans and a 1.7 percent decline in investments, creating a favorable mix variance.  Overall ROA is projected to remain unchanged at 0.90 percent suggesting that an unfavorable rate variance will also prevail. 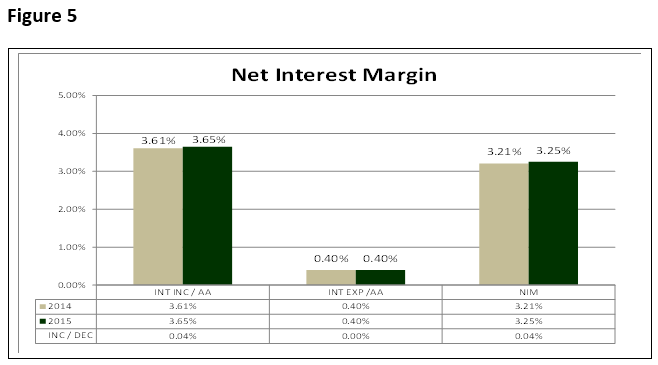 Provision expenses are budgeted to increase by about 12 percent, due to a greater rate of loan growth than in recent years.   Credit costs in 2014 were lower compared with peak levels of the past several years.

Fee income is expected to increase by 5.58 percent over 2014 totals.  This approximates the overall growth in numbers of accounts and balances.

Operating expenses are projected to rise by 6.2 percent.  The increase generally is attributed to the escalation of regulatory and compliance costs, and to substantial increases in information technology and health care costs.

Most community bankers expect 2015 to be a difficult year for a variety of reasons including continued pressure on their net interest margins, and lower than desired loan demand.  Additional challenges include ongoing and historically low interest rates, intense pricing competition for commercial and mortgage loans, higher operating costs from increased regulation, and rising salary and benefits costs.  Moreover, banks will have fewer opportunities to raise fees to offset these costs.

However, loan demand is not yet strong enough to support both loan growth and an increase in loan yields.  In some cases, loan yields are expected to decline even as balances grow and loan-to-asset ratios improve.  Loan growth will exceed the demand of recent years.  However, net income growth will continue to be constrained by unrelenting increases in operating costs, particularly related to regulatory compliance, technology and health care.

We suggest that bankers focus on balance sheet management; improve their loan pricing discipline; continue strong control over operating expenses; and implement value-based fees for service.  Managing all of these difficult tasks simultaneously will be crucial to maintaining the current level of profitability as modest growth returns.  Above average profitability and ROA improvement will be possible in markets where above average loan growth is attainable, where deposit costs may be contained or decreased, and where favorable mix variances can be obtained by funding new loan growth out of existing liquidity.